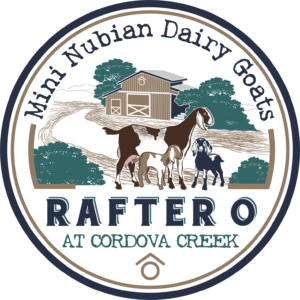 protectors of the realm

After having two Maremma Sheepdogs as the Rafter O’s first livestock protection dogs, in Spring 2021, we decided to switch breeds to the Kangal Dog.  Beyza joined our farm in March 2021, and Kane joined in April 2022.  The Kangal Dog has a much shorter and more manageable hair coat which better handles the Texas heat and sticker burrs.   Kangals have a similar guarding style and personality as Maremmas, and we are very happy with our choice to switch breeds.  After PennHIP certification this summer, we will have our first litter on the ground in Fall 2022.

The Kangal Dog is an ancient flock-guarding breed, genetically related to the livestock guardian dogs found today in Central Asia. Beginning in the 11th Century, nomadic Turkic tribes who migrated into modern-day Turkey most likely brought along their own working livestock dogs. The degree to which the modern breed descends from these dogs as opposed to the influence of working dogs already native to Anatolia remains an open question.

Today the breed is named for the Kangal District of Sivas Province in Central Turkey, but the dogs were historically found throughout the high Anatolian plateau, displaying remarkable uniformity in appearance, disposition, and behavior. Both the prominent landowners (referred to as aghas) as well as shepherds and villagers with their personal flocks took great pride in the dogs’ ability to guard their flocks of sheep and goats from traditional predators such as the wolf, bear, and jackal. Kangal Dogs guarded livestock close to villages and on the high summer pastures known as yaylas. In recent years there has been a decline in livestock-raising, and in village-raised Kangal Dogs because many people have left for urban areas, where Kangal dogs and crosses are now common. The Kangal Dog is a national treasure and cultural icon celebrated in festivals and appears on Turkish postage stamps and commemorative coins.

The Kangal Dog was recognized by the United Kennel Club in 1998.

The Kangal Dog is a large and powerful dog, whose size and proportions have developed naturally as a result of its continued use in Turkey as a guardian against predators. The head is large and moderately wide with drop ears. A properly proportioned Kangal Dog is slightly longer (measured from prosternum to point of buttocks) than tall (measured from the withers to the ground), and length of the front leg (measured from point of elbow to the ground) should equal slightly more than one-half of the dog’s height. The tail, which is typically curled, completes the distinctive silhouette. The Kangal Dog has a double coat that is moderately short and quite dense. The Kangal Dog has a dark or black mask and ears that contrast with a body color which may range from cream to pale tan or fawn, but can appear gray when there are more dark (sable) hairs in the outer coat. Honorable scars or other evidence of injury resulting from working in the field are not to be penalized.

The Kangal Dog is first and foremost a livestock guardian dog and typically possesses a temperament typical of such dogs:  alert, territorial, and defensive of the domestic animals or the human family to which it has bonded. The Kangal Dog has the strength, speed, and courage to intercept and confront threats to the flocks of sheep and goats that it guards in Turkey and around the world. Kangal Dogs prefer to intimidate predators, but will take a physical stand and even attack if necessary. Kangal Dogs have an instinctive wariness toward strange dogs but are not typically belligerent toward people. Working dogs are generally reserved with strangers unless the owner is present and offering reassurance.

The head is large but in proportion to the size of the dog without appearing heavy or coarse. The female’s head is somewhat more refined than the male’s head. Viewed from above, the broad skull tapers very slightly toward the place where the muzzle joins it and then tapers slightly from the base of the muzzle toward the nose. When viewed from the side, the length of the muzzle, measured from stop to the end of the nose, is slightly shorter than the length of the skull, measured from occiput to stop, in an approximate ratio of 2:3.

The neck is powerful and muscular, moderate in length, slightly arched, and rather thick. Some dewlap is present, especially on males.

The shoulders are well muscled and moderately angulated. The front quarters are slightly heavier in proportion to the hindquarters. The forelegs are long, well boned, and set well apart, with strong, slightly sloping pasterns. The elbows move freely and close to the sides.

Faults: Loose shoulders or elbows in mature dogs; bowed front legs; feet that turn in or out; chest too wide or too narrow.

The body is powerful and muscular. The topline inclines very slightly downward from the withers, levels, and then rises with a slight arch over the short, muscular loin which blends into a moderately short and slightly sloping croup. The ribs are well sprung. The moderately wide chest is deep with the brisket extending down to the elbow. Tuck-up is moderate. The Kangal Dog is a working dog and should always be presented in well-muscled condition.

The hindquarters are powerful and well-muscled although somewhat less substantial than the forequarters. The hind legs are well-boned and moderately angulated at the stifle and hock joints. The hind legs are parallel when viewed from the rear. The rear pasterns are moderate in length and slope slightly forward from the hock joint when the dog is standing in a natural, balanced position.

Faults: Poorly muscled thighs; insufficient or excessive angulation at stifle or hock; rear feet turning in or out.

Feet are either rounded or oval in shape with well-cushioned pads. Toes should be tight and well-arched. Nails, which may be black, white, or both, should be kept blunt. Rear dewclaws may be absent, present, single, or double. Dewclaws may be removed.

The tail is thick at the base, undocked, and tapering to the tip. The hair is slightly fuller on the tail than on the body. When the dog is relaxed, the rather long tail reaches at least to the hock. When the dog is alert, the tail is carried in a curl over the back. The curl may be tight or loose, but when the tail is curled upright, the tip of the tail may fall off to one side of the hip.

Faults: Feathering on the ears, body, legs or tail; lack of undercoat; long or shaggy coat.

Color is an important breed characteristic of the Kangal Dog. In Turkey, non-standard colors or patterns are indicators that the dog is not a purebred Kangal Dog. The base coat color of the Kangal Dog is always solid and ranges from cream to pale tan or fawn, but can appear gray when there are more dark (sable) hairs in the outer coat. This basic color is set off by a black or dark mask that may completely cover the muzzle and even extend over the top of the head. Ears are dark or black, at least at the edges. White is only permitted on the feet, chest, and chin. The white on the feet may extend half way up the forearm. The white on the chest may range from a small spot to a blaze, which may extend in an irregular stripe under the chest. Such blazes are frequently outlined with dark hair. A small white spot is allowed on the chin. The tip of the tail may be dark or white and a dark spot at the caudal gland in the middle of the tail is often present.

Disqualifications: Lack of masking on muzzle. Dogs with a red coat, or any color other than that described above; dogs with piebald, brindle or other parti-colored patterns; white markings on the face other than the small white spot on the chin; white collar markings; white extending above the forearm. As with other breeds, mismarks can occur but such dogs should not be bred.

Faults: Mask that is minimal and poorly-defined.

Height at maturity (minimum two years), measured at the withers, typically ranges from 29 to 33 inches for males and 27 to 31 inches for females. The typical weight for a Kangal Dog in good condition ranges from 110 to 145 pounds for males and 90 to 130 pounds for females. Height and weight in both sexes may exceed the foregoing and should not be penalized as long as overall balance is maintained.

The Kangal Dog’s movement reflects the breed’s combination of strength and agility. Its natural gait is relaxed and efficient with strides of moderate length. At a walk or slow trot, the back and neck are level. Pacing at a slow gait is acceptable. As speed increases, dogs may single track.

(A dog with a Disqualification must not be considered for placement in a conformation event, and must be reported to UKC.)

how we care for our dogs

Vaccinations – Our dogs are vaccinated for Rabies, Distemper, Adenovirus, Parainfluenza, Parvo, and most importantly, LEPTO!  It is important to vaccinate your dogs yearly with a 4-strain Leptospirosis vaccine!  Here is a video that explains the dangers of LEPTO!

Diet – We feed our LGDs Purina Pro Plan Large Breed Chicken and Rice.  They do well on this diet! 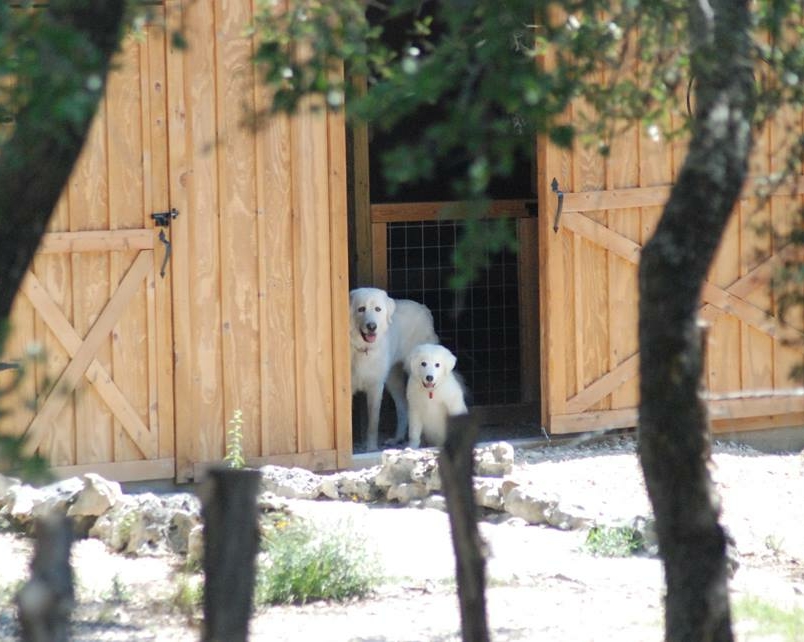 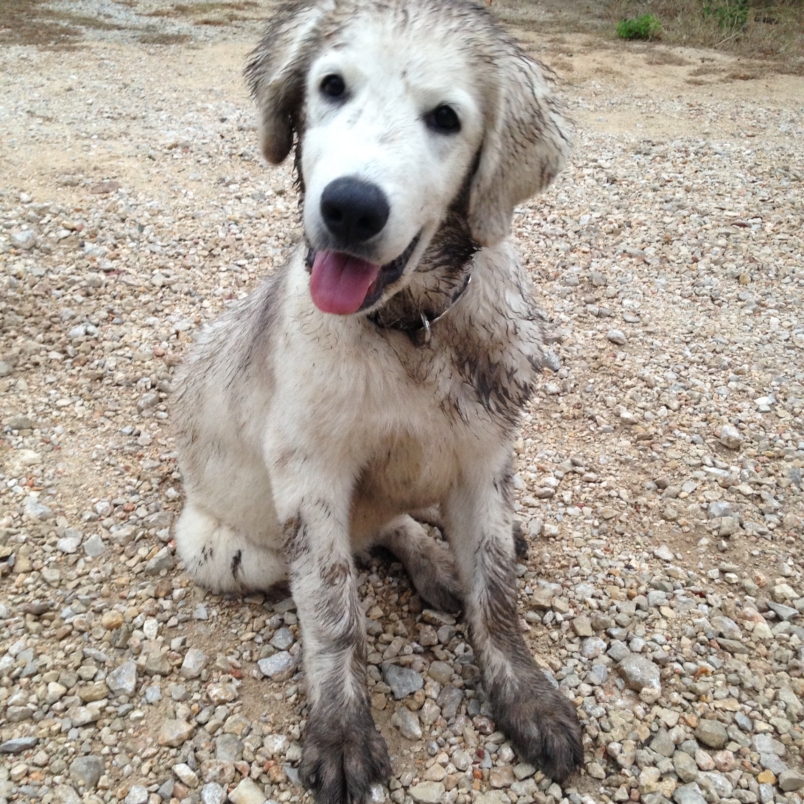 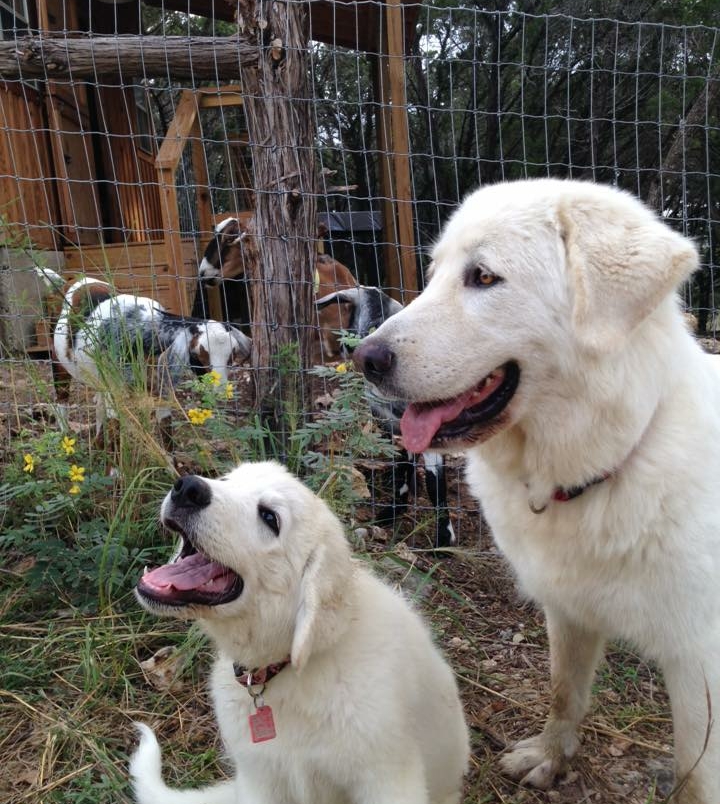 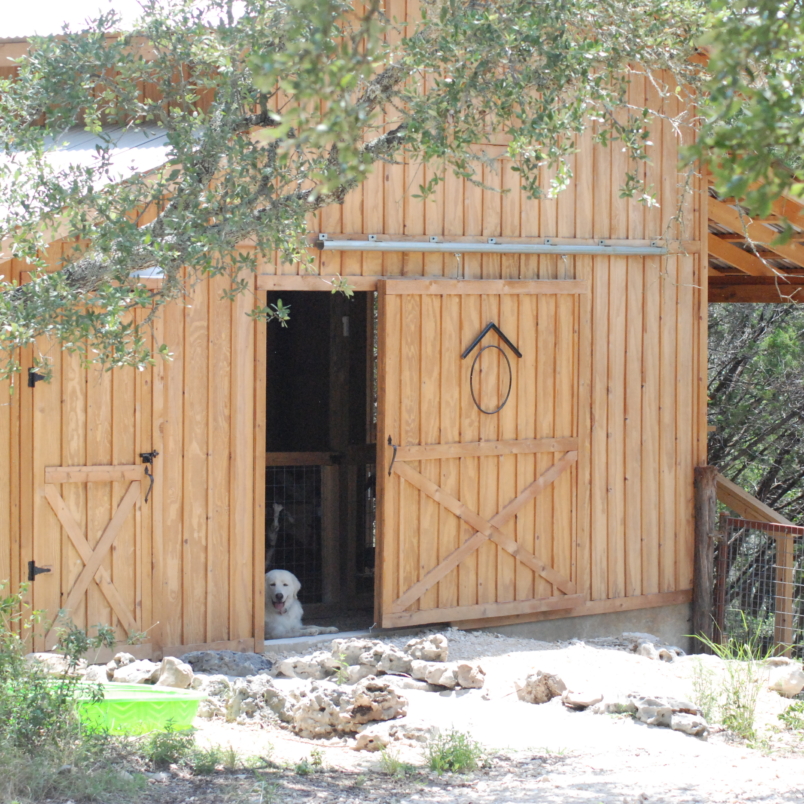 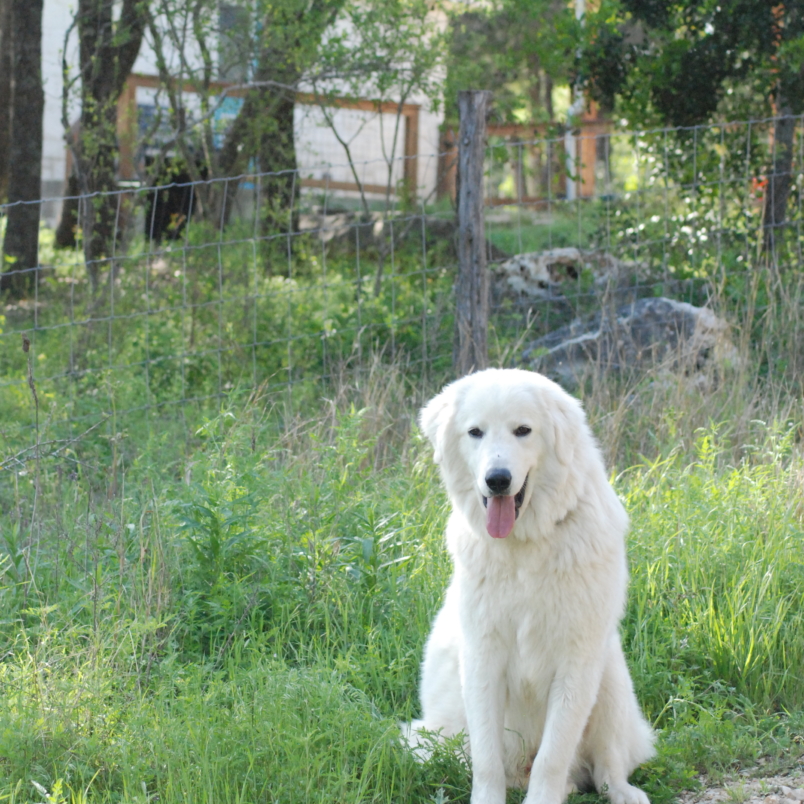 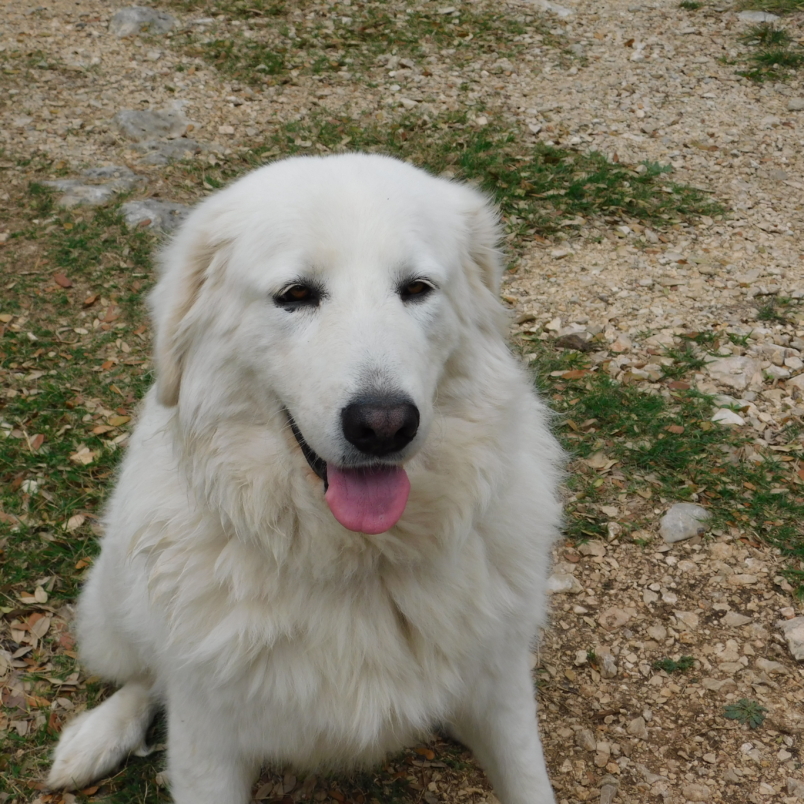 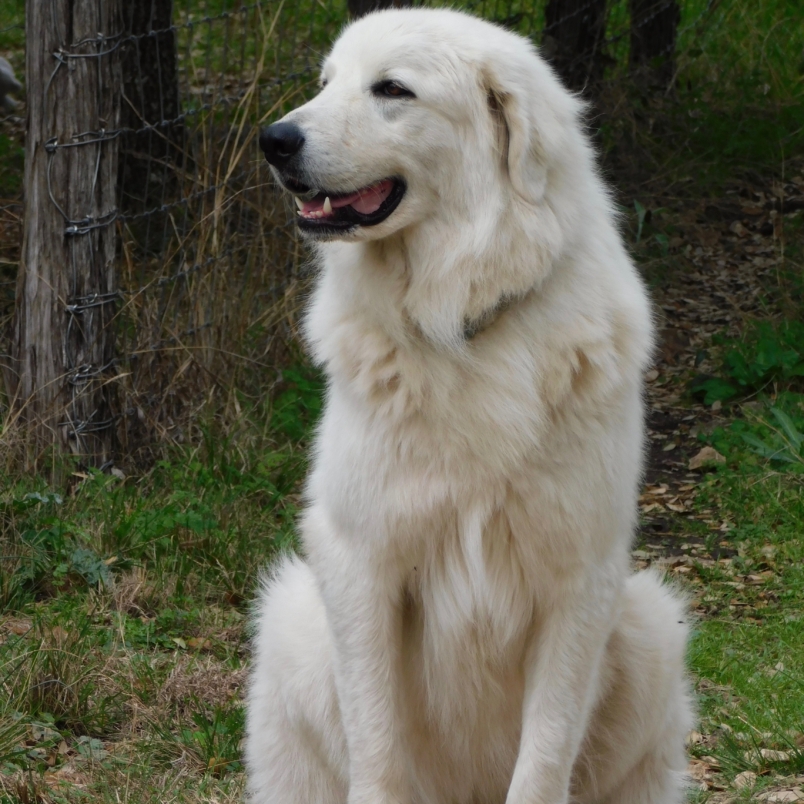 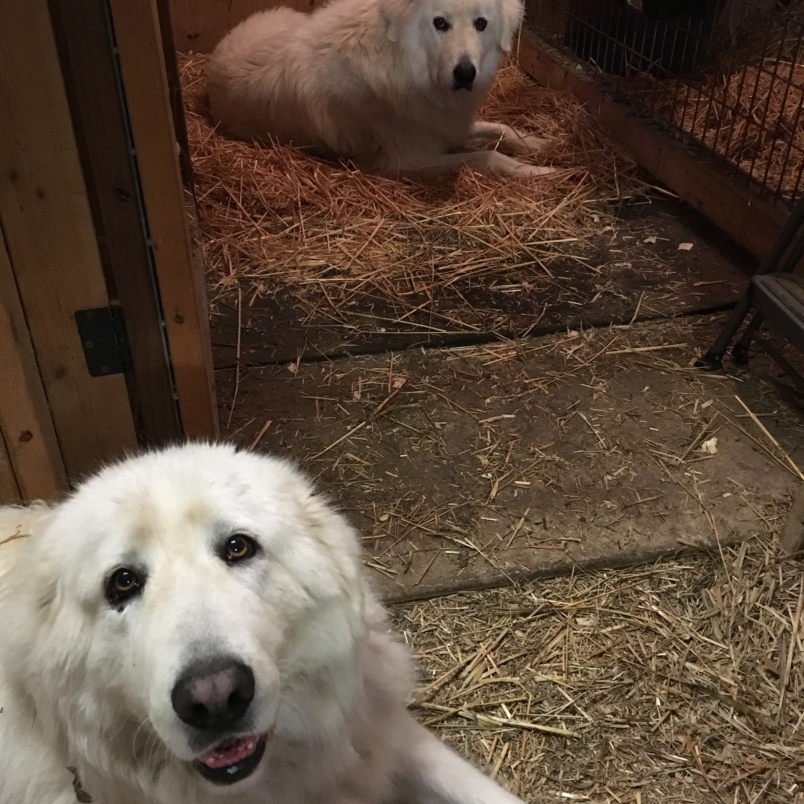 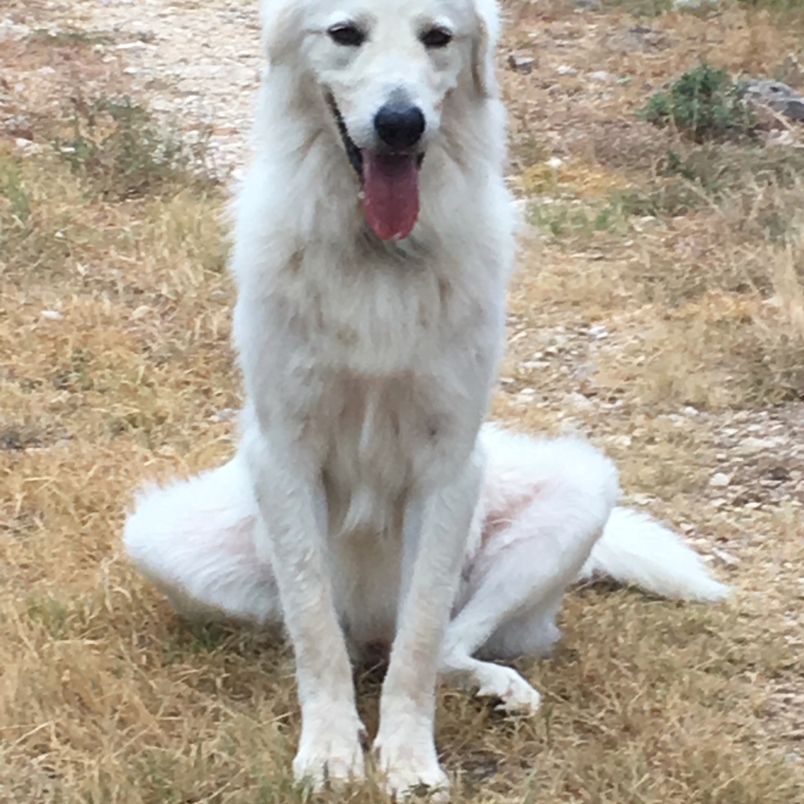 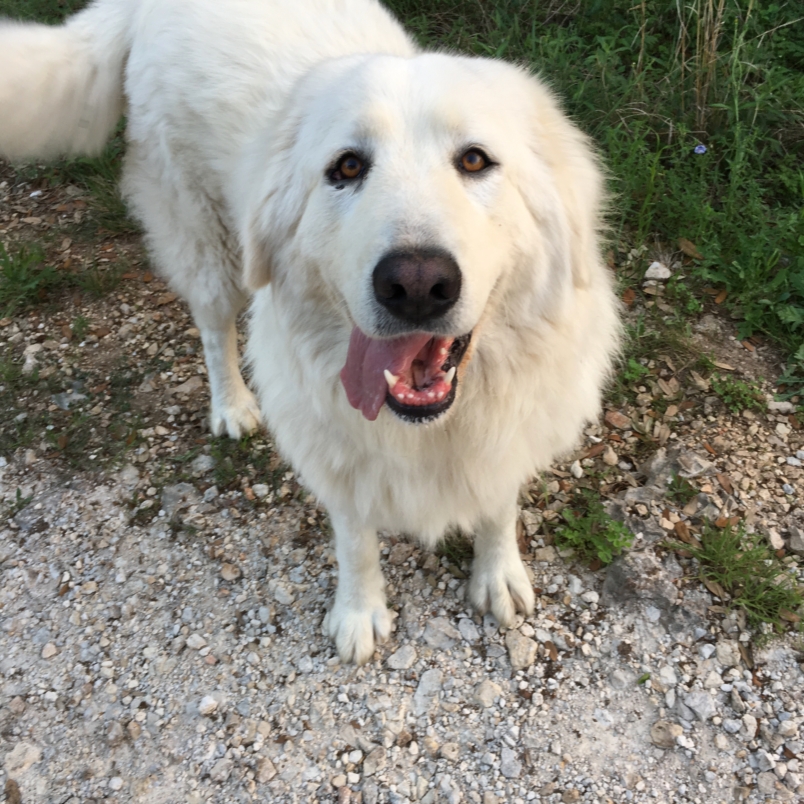 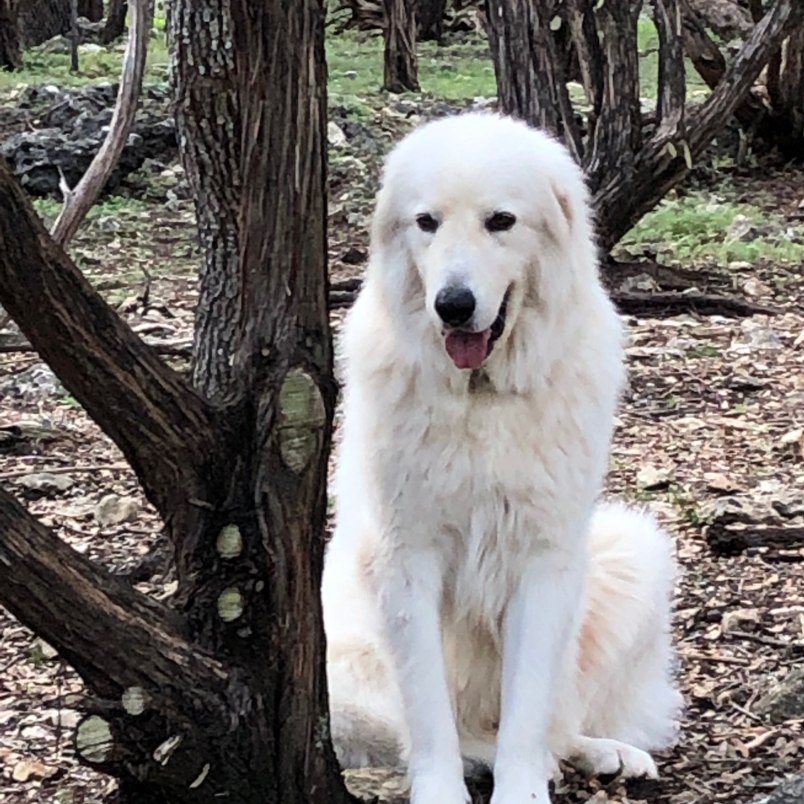 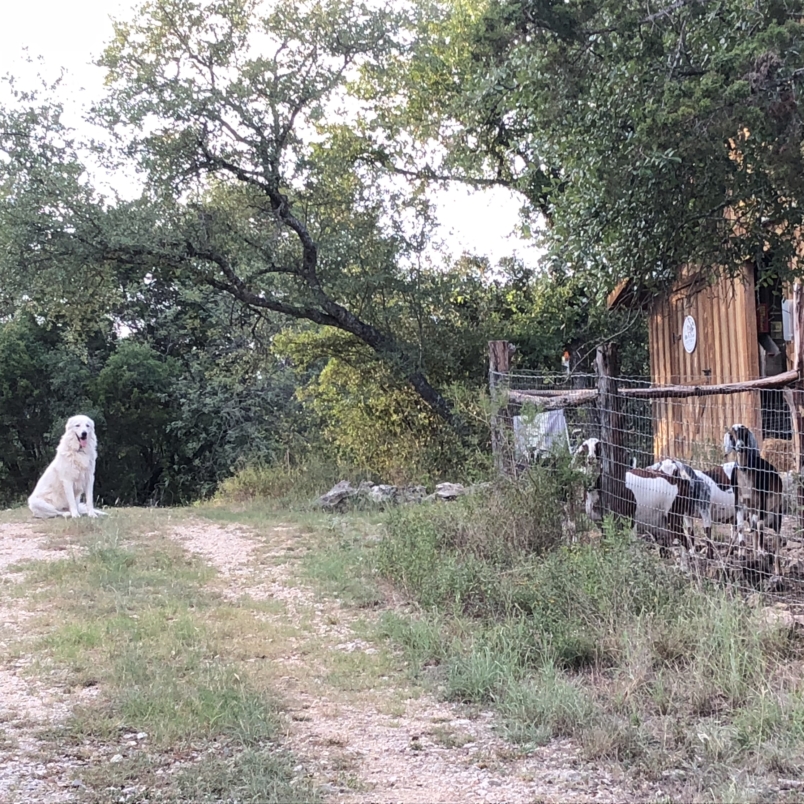 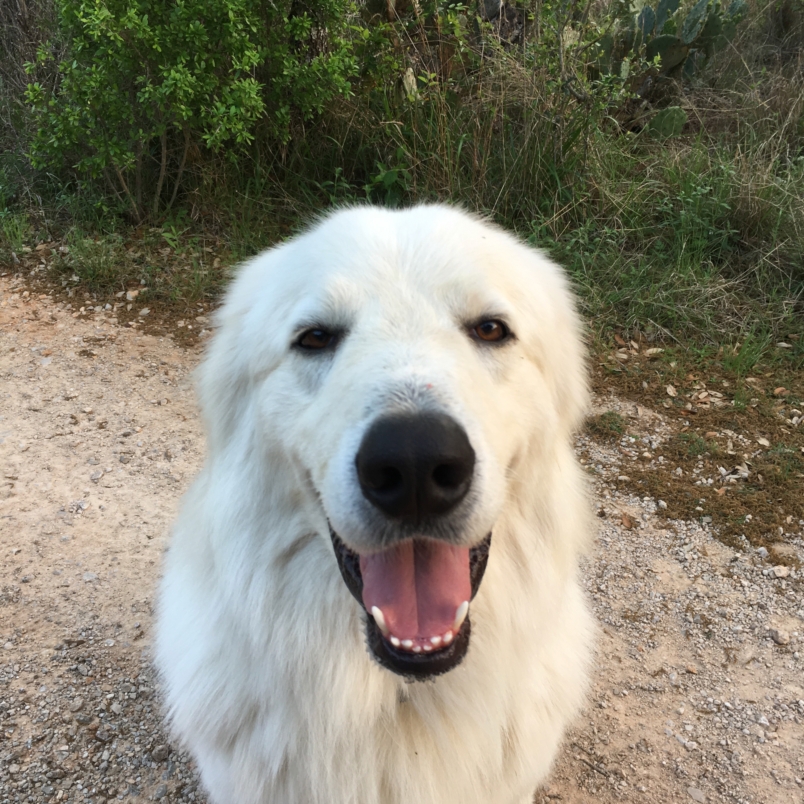 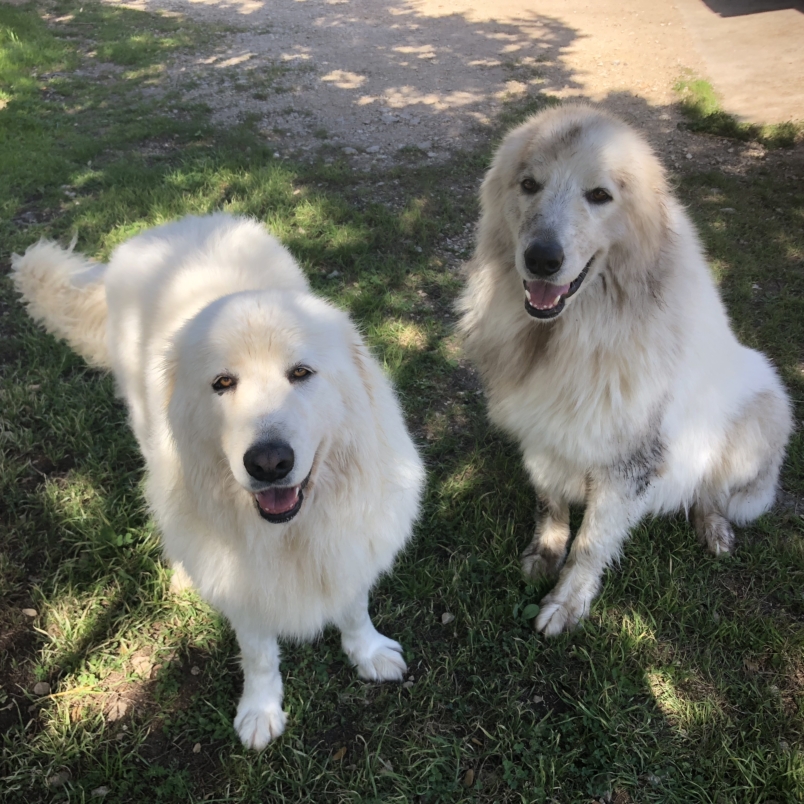 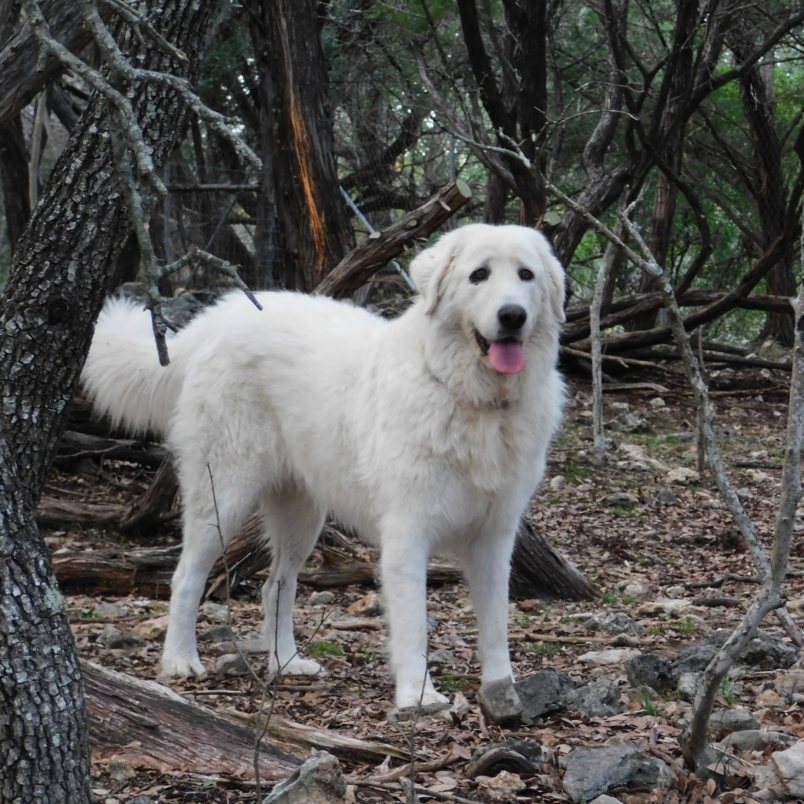 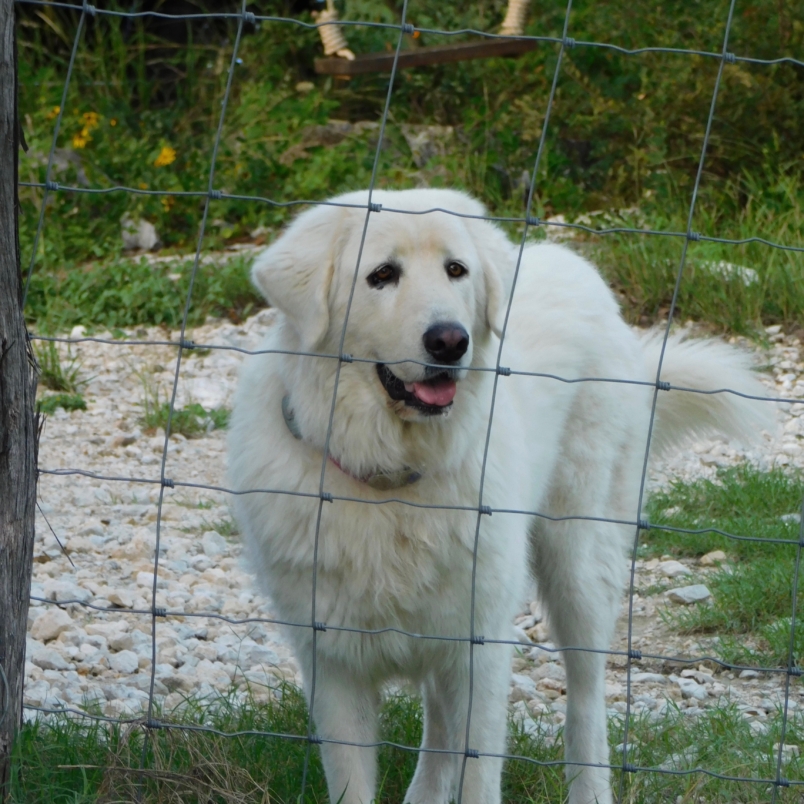 here's what you need to know

LGDs are different from pets or “farm dogs.”

Driving off predators with an LGD, rather than having humans shoot them, results in a more balanced environment.

Your neighboring LGD benefits all of us.

What LGD breeds are most common in the U.S.?

Some LGDs are a cross between these breeds.

Some Dos & Don’ts when you live near an LGD

What to do if you are concerned about our LGD:

We do our best to be a good neighbor, but sometimes a problem arises that needs to be addressed.

The best way to handle an issue is to call us so we can talk about what is happening. Most problems can be managed with a simple conversation.  Please reach out to us!