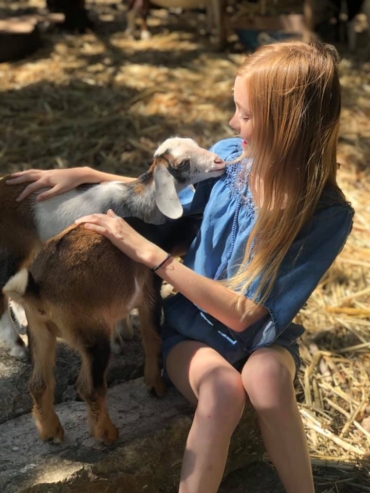 Our Rafter O Mini Nubians are dam-raised but super friendly!  Most dam-raised kids can be pretty wild without daily interaction from their humans.  We are present at every kidding, and our kids are handled immediately after birth.  The dams receive extra help from us in drying off kids, clearing nasal passages, and getting kids to latch on for their first sip of colostrum.  After the kids latch on and are doing well, we leave momma and babies to bond.

During their first week of life, kids stay in their kidding pen with their dams.  Two to three times daily – they get to come into the alley of the barn and outside to get some sunshine and stretch those legs!  Several times a day, kids get hands-on human interaction.  This is when their friendly personalities really develop, and they create good associations with humans.  Cuddles, scratches, kisses…these kids are spoiled!

After about one week, the kids and their dam get to go back into the general population in the doe barn.  This is the time that it is super important to keep up daily interactions with all kids.  Sometimes there will be one or two kids that are VERY attached to their dams.  They might be shy at first, but eventually, they will see all the other kids having fun with humans, and they join in. 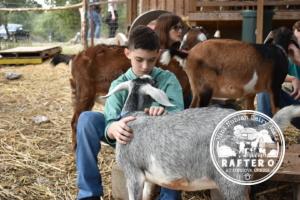 When we have large litters such as triplets or quadruplets, there is always one kid that isn’t getting as much milk as the others.  We will supplement with a bottle for these kids which makes them even more friendly!

As a Rafter O adult goat, the spoiling doesn’t end after you grow up.  Our adult does seek out head scratches, neck rubs, and sometimes demand full-body massages!  Most of our goats know their names and will come when called.

We are very proud that all of our Rafter O goats have super-friendly personalities!